Thanks for Visiting my Blog!

I am curious to learn where the people who are reading my blog are from in the World. I don't know any way to find out except to ask, so I am. I have a Visitor's Poll on the right side. Please take a second to select the best answer. If I don't have your Country listed it is not intended as a Slight (China was suppose to be there; I can't add it now). I quickly realized I could not list every country, so I have continents listed. Feel free to drop me a comment or email as to which Country you reside in if it isn't in the list IN ADDITION to selecting the best answer in the poll. Thanks

Here are my fourth graders: 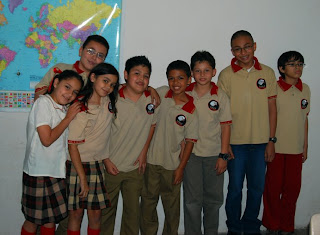 It's been awhile since I posted on here and I apologize. Eagle College (it still seems weird to me to refer to a k-6 school as college) had its spring break from March 14 through March 31. I returned to South Arkansas for most of that time and then returned via Austin, Texas and Big Bend Texas. My search for blue bonnets around Austin was a bust, but I enjoyed my day in Big Bend. I should have photos online sometime of Big Bend.

Back to Eagle College.

Upon arriving back in Cuidad Miguel Alemán on Sunday, March 30 I discovered that one of the teachers was not returning after the break. On Monday I discovered that another teacher was not returning. The teacher who had been teaching 4th grade had a sister involved in a serious car accident in San Antonio and stayed in San Antonio to be with her. The teacher teaching 2nd grade also had some family problems and, if I understood correctly, is in Florida.

There are only 8 students in 4th grade compared to my 17 in third grade but they are in a similar situation to my third grade - they need their vocabulary built up before they can learn 4th grade material in English. Plus I have 1 student who is ADD. His parents have decided they do not want him medicated. To say he is disruptive to the class is an understatement.

Added to this mix is chicken pox and 100 degree weather with no AC - at home or in my car. We do have AC at school thankfully.

This is the first time since my return that I have a sense of not being behind although in truth I am still a little behind. But most of my tardiness now is on projects unrelated to third or fourth grade. In addition to teaching I am also doing video for the local church. That includes funeral services for the Pastor's mother of which I have so far made 50 DVDs. I currently have one " 2 1/2 hour" video to get burned to DVD of a Church dedication (March 14) and this past Sunday's service. Once I have those on DVD, I will finally be caught up on DVDs except for making any copies requested. I am hoping a lot of people want the church dedication since the money from those could pay for my Car's AC.

Back to Chicken Pox or varicella in Spanish. One of the first graders had it when we returned from Spring Break. She did not come to school because of it. Another first grader soon had it. A replacement teacher came down with it and just this past Thursday one of my third grade students left class with it. As I understand from the internet, it takes 10 to 21 days after exposure for chicken pox to manifest itself. A person is contagious beginning 2 days before they show the itchy red welts (in other words before trhey even know they have chicken pox) until all of the welts are scabbed over. Chicken pox can be transmitted by both direct contact and by air. So I may have more students in a couple of weeks with chicken pox. Thew good news is my student had been vacinated for Chicken pox so her case hopefully will be milder than normal. About 2 out of 10 people vacinated once for chicken pox still contract the disease. Now they usually give a double dose of the vaccine - 2 different times - and that seems to be near 100% effective.

Normally a person does not get chicken pox more than once in a lifetime. I had them when I was a baby so hopefully my immunity is still good. Time will tell.

Oh and the Spanish word makes more sense than the English. Chicken pox is from the varicella zoster virus.
Posted by Tim New at 9:45 AM 1 comment:

Search this and other sites

Visitors: where do you live?

Welcome to a new world!

Links to Friends" and other Places

Novel involving Alzheimer's
Novel that Fans of Harry Potter may like. Books by Tamora Pierce